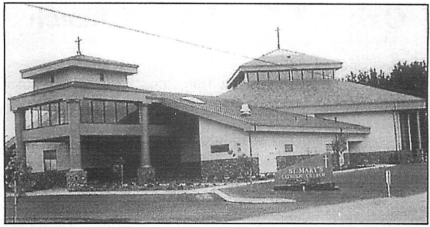 For twelve years, following the closure of the original St. Mary's Church on 16th Street, Mass and normal church activities were celebrated in Leavey Hall at St. Mary's School on Janes Road.  While arranging and rearranging the hall for both church and school activities was at times a challenge, Fr. Mike Kelly said, "I will always regard the hall as a lifesaver and a Godsend to our parish community."  With a generous gift bequeathed by Mrs. Berniece Leavey in 1993, the process of fundraising was begun in earnest to erect a new church dedicated to Mary, the Mother of God.  Groundbreaking was begun in May 1995, and the completed church was dedicated on September 8, 1996 (birthday of the Virgin Mary).

Local architects, contractors, and artists were called upon to build and design the structure and many of the congregation's suggestions were included.  All the stained glass was completed in Crescent City.  Matthew, Mark, Luke, and John are represented in the small Eucharistic Reserve Chapel windows.  The three large windows represent Jesus Teaching in the Temple, the Presentation, and the Annunciation, with the round "rose" window in back depicting a Native American Madonna.  Stations of the cross were designed by Sandy Moore and cast by Bob Crain who created the Fisherman Memorial on Woodley Island.  The altar, ambo, baptistery, and cross were designed by Roger Hogan Studio and made from old-growth curly redwood by one of our parishoners, Pietro Stagnoli.